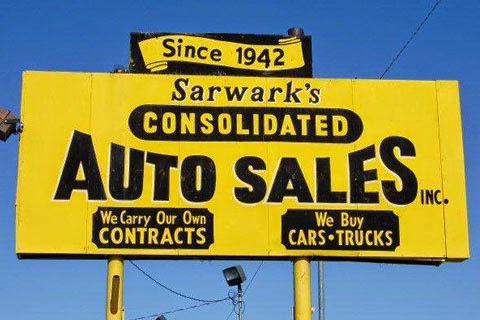 Over 70 years ago, Roman “Slim” Sarwark moved from South Bend, Indiana to Phoenix, Arizona to convalesce after he lost a lung to tuberculosis. His doctors didn’t give him much chance to live for many more years.

Slim started Sarwark Motor Sales in 1942, selling one or two cars at a time. His hard work and dedication built the business up, through selling new cars, mobile homes, and eventually only selling quality used cars. He was at the lot every day until about a week before he passed away at the age of 87 in 1999.

My father, Frank Sarwark, worked with my grandfather as he grew up, sometimes being called from high school to bring back the car he was driving so a customer could buy it. He’s the President of the company now, and just like his father, he’s at the lot every day.

The name has changed to Consolidated Auto Sales, Inc, but it’s the same business my grandfather started 72 years ago. When people come to us, they aren’t always in the best financial or credit situation, but they need a vehicle. We still treat every one of those customers the way we would want to be treated, with respect and integrity. We do our own financing and do whatever we can to work with people to get the vehicle they need.

That way of doing business is not as common as it should be. We can’t make other dealers change how they do business, but what I can do personally is join my father in the family business to make sure that we keep living up to the standards set by my grandfather and father for another generation.

0 thoughts on “The Next Chapter in my Career”