Police have to tell you why you're being arrested.

Undercover cops have to admit to being police if you ask.

What's a law that isn't real but non-lawyers think is?

Be considerate of people, not viruses.

Why are you buying enchilada sauce? 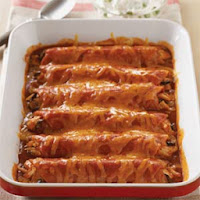 We just got back from vacation late Friday night and I was going to make dinner for the family to give Valerie a break.  Simple bean and cheese enchiladas; refried beans, corn tortillas, pepper jack cheese, and enchilada sauce.  We had the first three things in the house, but no enchilada sauce.

I considered driving out to the grocery store to pick up some more enchilada sauce, but decided to do a quick Google search first to see if there was a recipe to make our own.  Third link down, I found this recipe for homemade enchilada sauce.  The ingredients were as follows:

I had all those spices in the house and the 15 minutes necessary to simmer the sauce.  The result was delicious.  Two cups of rich, spicy enchilada sauce for probably $0.20 worth of ingredients. Compare that to spending about $1.29 per small can of store-bought sauce (and needing two for a full batch of enchiladas).